So we knew this was in the pipeline but as good, law-abiding citizens over here in Newsville, we like to make sure the I’s and T’s on the contracts are all dotted and crossed before we start getting as excited as we should be for one of the biggest concerts of our time!

This stage from the band’s concert in Barcelona is the same one that will be used in Joburg and Cape Town next year. 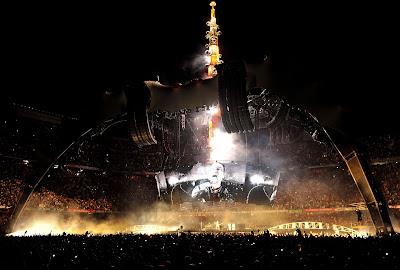 The two dates in South Africa took many years to confirm. Organisers Big ConcertsÂ say the world-class stadiums in Cape Town and Joburg sealed the deal. The size of this tour will be unlike anything we’ve seen here before: 150 containers will be shipped in, with 120 of those being transported back and forth between Cape Town and Joburg.Â The stage itself is 90-feet-high, weighing 180 tonnes. Then there areÂ the fans: 100 000 people can fill the FNB Stadium standing, with aboutÂ 56 000 in the Cape Town Stadium. And you can be sure these shows will most certainly sell out!

U2 play Joburg and Cape Town on the 13th and 18th of February, respectively. Tickets go on sale this Saturday.