I had wanted to start my blog with a list of reasons why I love Jozi and how it plays out as the backdrop to many of the fabulous things my job allows me to doâ€¦but instead, thisÂ blog is about Durban â€“ Port Edward, actually. And Two Princes.

Iâ€™ve just come back from a trip to the Wild Coast where the Royal Brothers were starting an 8-day epic journey from Port Edward to Port Elizabeth â€“ all to raise money for three African charities. I had convinced my boss that it would be brilliant to go there and get the story â€“ straight from the Princes. She agreed â€“ on the condition that I get an interview with the Princes themselves. Should have been an easy enough assignment, right? Especially since they are doing this for charity and would want publicity. Well, as with most good ideas, not necessarily soâ€¦

So I flew to Durban and drove along the beautiful route that is the N2 South â€“ passed Port Shepstone, Southbroom and Margate, and got to Port Edward â€“ a town so untouched, I could count the number of restaurants on one hand. There was, however, a Peg, done up to look just like the Keg. No sky-high apartments and no Spur â€“ this place is holiday heaven.

Late Friday afternoon I went to the place where a handful of media (mostly British â€“ ie, Sky BBC, Daily Express, etc) were meeting the Princesâ€™ PR person, the organisers and charity reps. I couldnâ€™t believe that the Royals were staying at the same resort as all the other bikers â€“ it was a pretty average place. Anyway, we were lead to a photo opp set up for the photographers and TV crews. We stood behind a line and watched the Princes from afar, talking to one of the organisers, before putting on helmets and whizzing passed. That was it. I got sound. Of motorbikes revving. But no Royals talking. 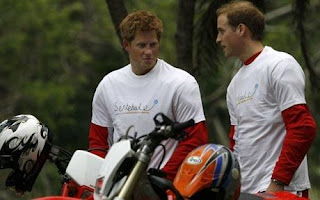 Prince PR person said, not tonight. I asked him, tomorrow then? He said, perhaps, but â€œthey are Princes, you know.â€ So I chatted to one of the organisers and tried to pry out info from him about the boysâ€™ preparedness for the rally. Then, Prince PR toldÂ us they were going to come say hello to us, but I must put away my microphone or else I will scare them away. Okaaaay. But then how will I record what they say?? No, this was meant to be an informal chat. No one was allowed â€œequipmentâ€ â€“ no cameras, no pens and pads. Damn those print journos who can just write down what they remember â€“ I need soundbites!

Okay, so Prince William comes in first â€“ waves hello and says, â€œI need a cup of teaâ€, and runs into the hall where we had all been meeting. He went to the back of the room, where a little drinks table had been set up and made himself a cuppa. I was flabbergasted. Isnâ€™t tea meant to be brought toÂ him â€“ made already?? Heâ€™s a Prince, isnâ€™t he? Then we all went inside and Prince PR said, go on, go talk to him. So I went up, put out my hand and said, â€œhi, Iâ€™m Nadia. Iâ€™m from Joburg, sorry Johannesburg.â€
Prince William: â€œOh yeah, I had my luggage lost there at OR Tambo.â€
Sky News correspondent pipes in: â€œGreat â€“ now youâ€™ve had the true Joburg experience.â€
Me: â€œSo anywayâ€¦whatâ€™s it like being a Princeâ€¦?â€

Okay, so I didnâ€™t ask that question but for the next twenty minutes or so we got to chat to them. Someone asked William about him flying Ecomomy class here. â€œCredit crunch, you know,â€ he quipped. He was very funny. Kept joking about how much he is going to fall off his bike during the rally and how unprepared he really is. One of the TV people said they shouldâ€™ve given him a mini camera to put on his helmet and record his voice during the trip, to which he said, that wasnâ€™t a good idea â€™cause the only thing weâ€™d hear would be â€˜oh no, Iâ€™m fallingâ€™ and â€˜ouch, ouch, ouchâ€™.

I moved over to the very cute red-cheeked Harry. He was wearing flip flops and just looked the epitome of Harry Casual. He was talking about Zim â€“ but not Chelsy (fortunately or unfortunately?), and bemoaning the fact that newspapers lead with stories about celebrities and not important world issues. Bless. One of the journos wouldnâ€™t shut up about economics and the history of some place I tuned out. Just let Harry talk, I thought, or let me talk to him! He seemed a lot more into world issues than his brother though â€“ and a lot more engaging. Showed me his arm bands and told me about which charities they represent.

And then they were gone.

Such lovely stuff about them spending time together as brothers, about how William hasnâ€™t seen as much of SA as Harry, all this stuff and we werenâ€™t allowed to record any of it! Afterwards, my photographer friend asked me whether I saw Williamsâ€™ bald spot. No, luckily I am too short to see that. Wouldnâ€™t want to spoil the illusionâ€¦ 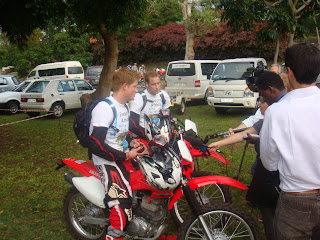 So did I get my story? Eventually, yes! Hallelujah. Four of us were given ten minutes with them the next morning at the rally start, and they said some great things â€“ especially Harry about riding through some parts of the former Transkei where Madiba grew up: â€˜itâ€™s only a pity Nelson Mandela wonâ€™t be joining usâ€™. And when they were asked to pose with some bikes, which someone went to fetch, Harry said to William, â€˜letâ€™s just go fetch them ourselves it will be quicker.â€™ Down-to-earth.

And me? Miss Head-in-the-Clouds. 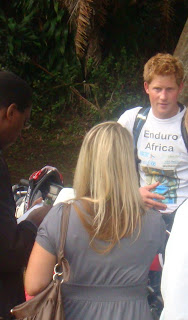