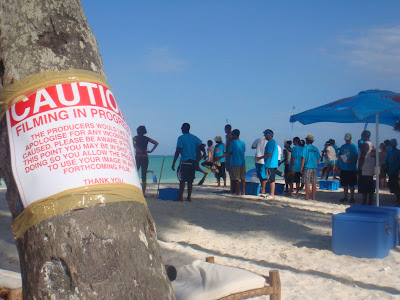 The reality competition is called Tropika Island of Treasure. I like to think of it as Survivor for Sissies. There are ten local celebs paired up with a competition winner. The goal is to win the challenges and win the Million Rand Prize. It’s filmed on a tropical island, but this is hardly roughing it. Instead of twig-made shelter and bugs for dinner, these contestants got 4-poster beds and Italian buffets. “Smooth and easy – just like Tropika,” commented one of the PR people. I’m sure… 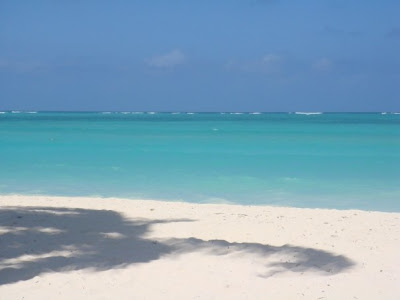 * Sometimes the Press Members are More Rowdy than the Celebs

Just because they have their names splashed in the media, doesn’t necessarily mean they’re the ones hogging the spotlight. But perhaps the less said about this, the better. 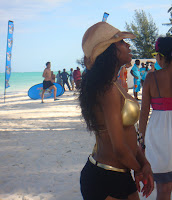 * Khanyi Mbau really does change twenty times a day.
She has something like a gazillion costumes – each of them more “blinging” than the other. At one stage, Mz Mbau started posing on the beach with the Masai warriors which sent the photogs into a spin.
* I should be watching more ‘Sewende Laan’ 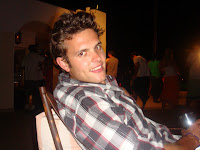 Cutie pie Hendrik Cronje plays Lucas. I can’t really tell you what Lucas’s character is like, but this easy-on-the-eye actor is sweet and very considerate of those around him. Did I mention how easy on the eye he is?

* It’s really expensive to call overseas from a hotel in Zanzibar. Or probably anywhere else for that matter.

Tasha Baxter discovered this the hard way. The Sunday Times said it was because of phone sex, but I know this mother of two better than that. She says she was told by the guy at the front desk after her first hour-long phone call the cost was 18 dollars. So she figured the next time would be the same too…

Well, that 500 thousand bucks would come in even more handy if she were to win it. 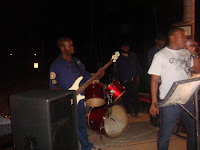 *If there’s a mic, Loyiso will rock it.
The singer at the hotel’s “Souk Bar” was doing a decent job of easing folks into the evening with his guitar. But when Loyiso took the mic from him, the party really got going. When the hotel’s SAPS-resembling band played for us on the Wednesday night, you could see Loyiso edging closer to the stage and then, next thing you know, he’s putting his own spin on the track. Love it! 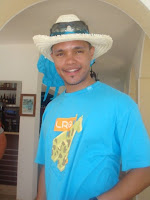 * Trevor Noah really is that funny in real life.
Some comedians are not so funny when you have to have a conversation with them or interview them. Trevor Noah on the other hand, is an ab-workout you don’t mind doing. One night, we were talking about how co-presenter Natalie Becker went running on the beach after dinner. Trevor had us in stitches as he recalled all the bad horror films he’s watched as his reasons for why he was too scared to do it himself (apparently he got over this fear a night or two later). He had us in stitches with his impromptu comedy routine. I wouldn’t be surprised if that material makes its way into his next show. 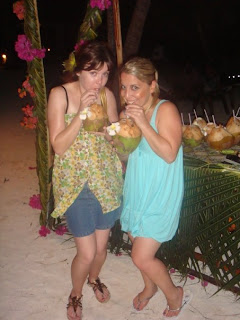