It seems the furore around the movie may turn out to be more dramatic than the film itself. Basically, Winnie Madikizela Mandela has threatened filmmaker Darrell Roodt because he didn’t get her consent to make the movie. Never mind the fact that dozens of movies are made every day about people who don’t give their blessing to the filmmaker in charge. There’s a great piece on the Daily Maverick on why it won’t really help Winnie to continue with the action. Roodt and his producer released a statement, saying they were going ahead with the film. The thing that stands out is that – to their knowledge – Winnie never objected to the book the film is based on, when it came out a few years ago…so why then would she object now? And of course, the Creative Workers Union of South Africa – the ones who started the whole hoopla – applauded her move. On a positive note, I’ve heard that District 9’s Sharlto Copley may just star in the film too.

The Top Gear guys are in town 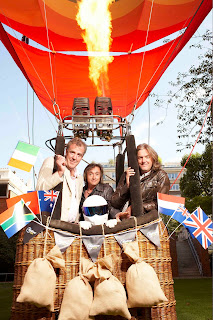 It’s become tradition, every year, around my birthday, for Top Gear’s Jeremy Clarkson and Richard Hammond to drive into town with their smart cars and smart-ass attitudes. This year is no different..well, actually it is, because the most recent guy to join the crew, James May, is also along for the ride. Their trip started in Cape Town and will come to Joburg this week. Gentlemen, start your engines!

From one Clarkson to another. This one is a Grammy-bagging, First-Season-of-American-Idol-winning Texan. And so nice! In an interview from New York, she told me she still watches the show when she can but didn’t know about the hilarious ‘Pants on the Ground’ video that’s spawned all kinds of copycats. Kelly is pretty down to earth and fun to talk to – she’s also a bit of a conspiracy theorist, saying she grows her own fruit and vegetables so that “if the country goes to crap, (my family and I) will be ready!”. Also – she had no idea that Serena Williams has been listening to her music while psyching up for the Australia Open.
Celebrity Survivor’s Funniest Moment
So rapper Jub Jub was so concerned about his “manhood” that he walked off the island in this week’s episode. Apparently he got some kind of rash “down there” and had to leave “to protect his family and his manhood”. Well, loads of people watching probably thought he did more damage to his manhood by telling the whole world that he was going to leave because of that. Add to that the fact that M-Net is investigating the charity he chose to benefit from his participation in the show…he put down his mom’s Itutheng Trust, which was discredited in 2007 when she was accused of defrauding donors, as the charity that would get the R500 000 prize money. Curiouser and curiouser…
The Scoop – all the top entertainment stories with a local twist – airs every Friday after 4pm with Richard Hardiman on 94.5 Kfm.