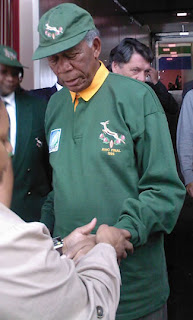 Big exclusive! Charlize Theron is heading for the 2010 Fifa World Cup Draw next week. I had heard this might be true, but only got official confirmation from her management in New York this week. Itâ€™s not entirely clear what sheâ€™s going to be doing, but she will be involved in the draw â€“ and there will be performances by Grammy-winners Soweto Gospel Choir and Angelique Kidjo together with Johnny Clegg. Itâ€™s going to be a busy summer â€“ weâ€™ve also heard now that Morgan Freeman will be in Joburg, Cape Town and Durban for premieres of the new movie Invictus, in which he plays Nelson Mandela.
Vuyo Mbuli made headlines early on this week â€“ the Morning Live anchor, literally, it seems, got caught with his pants down. A man laid an assault charge against the TV presenter after he allegedly found Mbuli in his girlfriendâ€™s house, getting dressed. The man, who accused Vuyo of having an affair, says the TV personality threw a vase at him, injuring his leg. Vuyo was arrested yesterday morning, after handing himself over, but the matter wasnâ€™t pursued any further and the charge was dropped. Vuyo says he wants to put this behind him. The question is though, will this have any kind of impact on his life in the public eye -career-wise or other?
The next film in the Twilight saga, New Moon, releases officially today in South Africa â€“ but Twihards have been filling cinemas across the country watching sneak previews. I got to speak to Robert Pattinson at the Cannes Film Festival and he told me this film actually has more in it for guys than for girls â€“ because of the fighting and the werewolves. He also says he thinks the next one, Eclipse, is even better because the book is his favourite in the series.

Oprah is due to jet into Joburg this weekend. She often pops in around this time of year, all hush-hush, but this visit is a lot more publicized. And itâ€™s hot on the heels of her announcement that the Oprah Winfrey Show will end in 2011. Sheâ€™s here to host O, The Oprah Magazineâ€™s reader event called â€˜You Have the Powerâ€™. Sheâ€™s going to be spreading some of her positivity to about 400 women â€“ I mean, really, with all that money how can you not be positive?
And of course, The Killers will be here in a few days â€“ I have word that they are coming a few days before the show in Joburg. I might just have to find out where they are staying tooâ€¦
Pic from @TheKillers twitter page 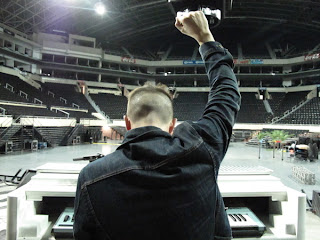