SA left empty handed at the BAFTAs
It was the last big awards ceremony before the Oscars next week, and also the ceremony that had honoured District 9 with the most nominations (7). But District 9 didn’t manage to scoop any statues at the British Academy of Film and TV Awards. The Hurt Locker did well, picking up many of the night’s big awards, followed by Avatar  setting the stage for a duel between former husband-and-wife directors Kathryn Bigelow and James Cameron.

It seems a number of Martha Stewart’s fans in South Africa were left wanting after her talk at the Design Indaba in Cape Town this morning. Some Twitter users expressed their frustrations during today’s talk by the design and homemaker queen. One said it ‘flopped like a bad souffle’ – another said she ‘used the time to promote all her products instead of giving insight into her success’. Still one user defended her, saying the comments show how naive the local creative industry is. Oh well, at least she let her followers know how nice she found Singita Game Reserve!
Die Antwoord hit Joburg 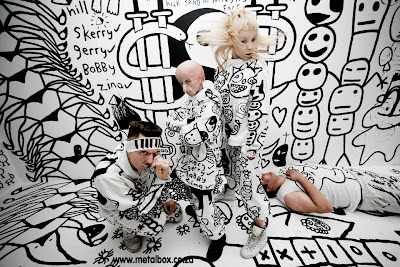 It almost makes sense that a group which has blown up on the “interweb” has declined media interviews, opting  for web posts and Twitter comments instead. One thing’s for sure, this Cape Town based Afrikaans hip hop group has marketing savvy that extends beyond the net. Their posters all over Joburg show that. See you at one of their gigs at the Alexander Theatre in Braamfontein tonight or tomorrow night.

Comedians for a cause
Eddie Izzard kicked off the first comedy show to benefit the 46664 HIV/Aids initiative started by Nelson Mandela. 10 top local comedians will take it to the next level at Sun City this weekend with the ‘It’s No Joke’ show. There’s only one female comedienne on the lineup – the rose among the thorns – Tumi Morake. She says she hopes more ladies will start doing stand-up so that one day they could have a 46664 made up entirely of women.
The Scoop – all the top entertainment stories with a local twist – airs every Friday after 4pm with Richard Hardiman on 94.5 Kfm.