The death of a fashion icon; and a diva heading to town?

Alexander McQueen commits suicide in his London home
It’s not only the fashion world that is today mourning the death of Alexander McQueen – or as he was known to friends, “Lee”. It is indeed all of those fans around him who loved his style and imagination, and hoped, aspired, to one day own his garments. He left an impressionable mark on pop culture – from stars like Madonna, Rihanna and more recently Lady Gaga, who seemed to be McQueen’s latest muse. She was fond of wearing his daring outfits, which suited her just-as-daring (if not more so) personality. The music video for Bad Romance is a classic example: 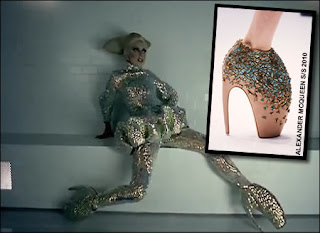 Is Whitney coming to SA?
Oh, whatever did we do before Twitter? How did we ever find out the news that some dreams are made of? A flurry of tweets has been going back and forth, saying the singer would perform a once-off show in Durban during March. Durban? A once-off show during her rest-of-the-world global tour? Didn’t really sound that likely. The thing is, without confirmation all Twitterville becomes is a virtual rumour-mill. So until an official press release or a Tweet from the (Verified Account) of Ms Houston comes through, we’ll be ‘saving all our love’ for another time ;) What appears to have happened is that an over-eager promoter had said she was to perform at his show, before she had in fact sign on the dotted line. Tut. Tut. Tut

But don’t worry folks, Dannii Minogue is in town…as the city’s latest food critic and weathergirl?
The younger sis of the darling Kylie is in Cape Town filming the ad campaign for Marks and Spencer. She first let her followers guess where she was, but soon couldn’t help herself and was tweeting pics of the Hermanus sunset, telling folks where she had just eaten (“You must try The Bistro in Hermanus. Shabby Chic interior with store and delicious food.â€) and giving those fans in dreary cold London constant reminders of how hot it is here. Pic from @DanniiMinogue: Location today for @marksandspencer I’m in heaven :-) on Twitpic

The biggest celebrity of them all – Madiba celebrated 20 years of freedom yesterday…
Where were you when the news was announced by F W De Klerk just a few days before and then when Nelson Mandela walked out of Victor Verster prison? I was but 8 years old and could not – did not – know then just what it meant for the future of my country.
Viva, Madiba, Viva!!

Valentine’s Day, baby!
In case you are interested in what some of the local celebs are going to be doing on that day…Danny K will be off to a wedding of a friend, while ex gal pal Leeann is off on a V-day holiday (it seems sheâ€™s always off on holiday!); Khanyi Mbau is taking the day to express l-o-v-e and capturing the idea of romanceâ€¦so speeing off fast cars, then? No, she says sheâ€™s having some friends over for dinner, wearing the â€œcultural colours of Valentineâ€™s Dayâ€. Singer Louise Carver is doing what she does best on that day – sing gorgeous love songs. Comedian Trevor Noah is not a fan and says itâ€™s too commercial. He believes we shouldnâ€™t celebrate it because he was dumped on that day in the past â€“ ag, shame!