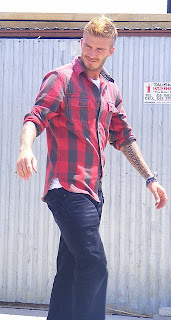 2010 Fifa World Cup Draw â€“ Cape Town is a buzz at the moment with the likes of all those soccer stars. But of course, I only really care about Charlize Theron and David Beckham â€“ just kidding! Becks has been putting on a brave face after getting the news that his grandfather died while he was in CT. He still went on to inspire underprivileged children in Khayelitsha. â€œOnse Charlizeâ€ has been in high spirits â€“ pulling out an â€˜Irelandâ€™ card in a rehearsal for the Draw. Itâ€™s only fitting, seeing as her boyfriend Stuart Townsend is a gorgeous Irish guy. SA musicians are getting in on the action too â€“ TKZee before the head off to perform in London are part of the fanfest, along with Flat Stanley, Cassette and Freshlyground. 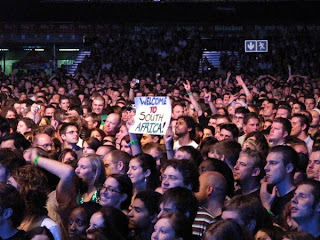 The Killers are going to wow Cape Town â€“ Joburg audiences have already experienced the magic of the Las Vegas group. They pull out all the stops in the show Iâ€™m still on a high from meeting and watching The Killers last night! Those going tonight are going to have a brilliant time – it’s filled with soul, energy, great story-telling, goose-bump moments and the hotness that is Brandon Flowers!
Golf fans â€“ and did you know, Mr Flowers is a big one – you can play a game of golf with Morgan Freeman. Heâ€™s going to be in town for the premiere of â€˜Invictusâ€™ next week. Next Friday heâ€™ll be playing golf in aid of three local charities â€“ including the Nelson Mandela Foundation. If you have R50 000 to donate to a good cause â€“ and want to meet and play a round with an Oscar-winning star â€“ head over to http://www.ewn.co.za/ for the details. There are also fourballs for sale for R15 000.

The Tiger Woods scandal just gets worse and worse â€“ a number of South Africans have compared him to Joost van der Westhuizen but in a sense this is so much more salacious. Here is a world-revered icon who has kept his life very private and controlled and now things seem to be coming apart. Like Joost though, he doesnâ€™t seem to be speaking truthfully from the start. He issued a statement saying he was sorry for hurting his family but he hasnâ€™t exactly apologized for having an affair (or two). Oh, and the voice message heâ€™s reported to have left on one of his mistressâ€™s phones has been made into a You Tube hit called â€˜Slow Jam.â€™