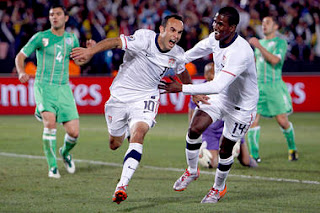 So while my gal pals ogle at Cristiano Ronaldo and Fabio Cannavaro, I have set my sights on Landon Donovan. He managed to score the winning goal against Algeria – in the 91st minute!! And yes, I think he’s a cutie. Apparently Bill Clinton was watching the match and went to the lockeroom afterwards to congratulate the team. He also told Ryan Seacrest that South Africa is a “pretty cool country” and everyone here has been very welcoming.