So the World Cup is in full swing – and the celebs are out and about. Their Royal Highnesses Prince William and Prince Harry have been visiting Lesotho, Botswana and South Africa, combining fun with charity. They both have organizations based in these countries, and they’re also rooting for England to host the 2018 World Cup so they spent Saturday morning meeting with FIFA in Johannesburg. And David Beckham. 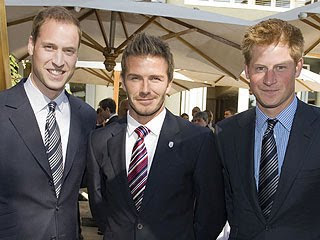 Saturday afternoon? Well, that they spent that with me…Technically, it was me and a few handfuls of other guests who attended a party in honour of Queen Elizabeth the II’s birthday (which is also recognized as the Monarchy’s official birthday) at a house in Hyde Park. But when Prince William looked into my eyes as he spoke about how he felt about the England team’s performance a few days ago, it may as well just have been me.

I’ve met the Prince and his Royal sibling before – in fact it was the subject of the first entry on this blog – but this time I felt a little caught under His Royal Highness’ spell. Yes, you may joke about his balding hair (I’m short, it doesn’t bother me if I can’t see it!) or that he is so like his dad Charles, but my, oh my, is he one charming, sophisticated man. He’s funny and sincere too. When he came over to our table and found out some of us were journalists, he zipped up his lips and joked, ‘oohh,, better not say anything here!’ Of course the first question was about Team England. To which he replied, ‘I should just write my thoughts down on a piece of paper and stick it to my pocket’, and that ‘walking into the changeroom afterwards was like walking into a morgue’. But then he changed tack and said he felt that the team was nervous, playing out of fear that if any one of them stepped out they risked being vilified, much like Robert Green has been.

I also got to speak to him about the Port Edward encounter, when he and Harry took part in the EnduroAfrica. He said he had so much fun, and is looking for something bigger and better to do next. Also found London Mayor Boris Johnson to be quite a character. He was bubbly and chatty, raving about the World Cup, and talking to Paul Elliot (an ambassador for England’s 2018 bid) about finding something as unique as the vuvuzela to boost their chances. He also said that he hoped that ‘when the World Cup is over, after the hangover,’ that the media is positive about the event and how good it has been.