Who knows which bright spark decided it would be fun to bring out 90s music stars to South Africa for a series of adverts for a lite beer? But I’ll admit, it has been fun getting to meet some of them. Enter MC Hammer – he of ‘U Can’t Touch This’ fame, Hammer pants, and yes, Hammerman, one of the cartoons I used to watch on KTV as a kid. He’s since lost his fortune, regained some of it, become a preacher, started a dance empire and become a social media fundi.

So he’s here for the Castle Lite ads – like Vanilla Ice was a few months ago. Some tweeps wanted to know if he would be mixing up his hit single with the latest SA You Tube phenomenon “Don’t Touch Me on My Studio”. I asked him about that, and he said that he had heard something about the video, but it was only because someone asked him to do a voice drop for it. Don’t be surprised then, if something along those lines does indeed surface! 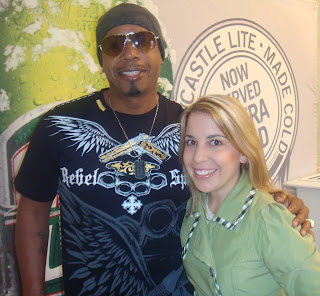 He’s a nice enough guy, and gives a great interview. Plus, he’s one of the names behind an initiative to spread awareness about malaria and help buy mosquito nets. Another good thing: his tweets. He has been spreading positive messages about South Africa, and Joburg in particular, to his almost 2 and a half million followers. Follow him @MCHammer.In the face of the negative British press, we can do with all the good words we can get.