An early morning call â€“ with a question I had to find the answer to: has Miriam Makeba died? A listener had sent an sms to 702, saying she had suffered a heart attack after a concert in Italy last night. And when another call came through with confirmation, it was off the gym treadmill and onto autopilot for me.

Writing up stories for the bulletins, interviewing fans and friends, doing live crossings from her home in Northriding. The emotion comes later.

I interviewed Mama Afrika, as she was affectionately known, in March last year when she celebrated her 75th birthday. Sitting before her, I felt somewhat nervous. Iâ€™ve interviewed the likes of Will Smith, Billy Joel and Annie Lennox but Miriam Makeba is up there when it comes to the star-struck scales. This is a women who was revered the world over; who worked with jazz greats Dizzy Gillepsie and Harry Belafonte; who had paved the way for so many of my favourite local female musicians. She had had a tour schedule to rival artists half her age and a work ethic double the size. But she was incredibly down to earth and humble; saying her children were her greatest achievement and that she had no use for being called a celebrity.

Itâ€™s always something I think about after the beast of radio news has been fed for one more day â€“ how do you sum up someoneâ€™s life in 30-40 seconds? Itâ€™s both radioâ€™s gift and curse: the message gets out there quickly and succinctly, but more often than not itâ€™s a shortened form of what you wish you had so long to say. At the end of it all -perhaps the most effective words are indeed the shortest: Rest In Peace Mama Afrika.

â€œShe was South Africaâ€™s first lady of song and so richly deserved the title of Mama Afrika. She was a mother to our struggle and to the young nation of ours.â€
â€“ Nelson Mandela

â€œâ€¦Our world was slightly better because of her serenading and we are poorer for her death. We give great thanks to God for this tremendous gift of Miriam Makeba. May she rest in peace and rise in glory.â€
â€“ Archbishop Emeritus Desmond Tutu 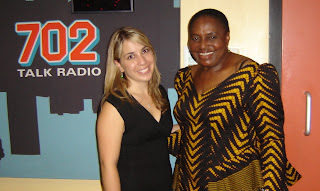