As you know, the reason I came to the Midlands was to interview John Cleese, for his role in the Spud movie. It is due for release in November, so my full interview has to wait a bit before it goes to air, and I have to save much of what he said during that time. But I can say this: I found Mr Cleese to be a polite, peculiar and humourous person. He did, however, call me a ‘wuss’ because I don’t like bats. Just before the interview itself began he was telling me about how a bat had come into hi room the previous night and how his girlfriend Jenny had been petrified by it. Cleese, on the other hand, quite enjoyed the experience, saying he likes a bat’s skin because it is silky and dark. He must have seen my face scrunch up because that’s when he told me I was a wuss and would get on very well with Jenny. Luckily I didn’t take it too personally. 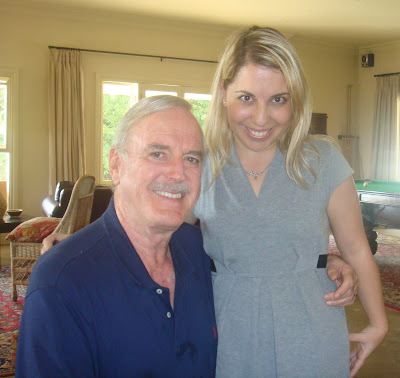 With The Cleese – he sat down so that I could “tower over” him. How sweet!

Spud author John van der Ruit was at the guesthouse when I was waiting to do the interview. I commented to him that this all must be like a big Hollywood dream for him, and he said that it was, and the best part is that it’s going so well. I bumped into him a little later while out to dinner at the best Italian restaurant in the Midlands – he was with his family. His mom was very quick to tell me she’s not at all like the mother of John ‘Spud’ Milton in the book. I would probably also be quick to make that clear – especially when the first book in the series opens like this:

“Cursed with parents from well well beyond the lunatic fringe, a senile granny, and a dormitory full of strange characters, Spud has his hands full trying to adapt to his new home.” 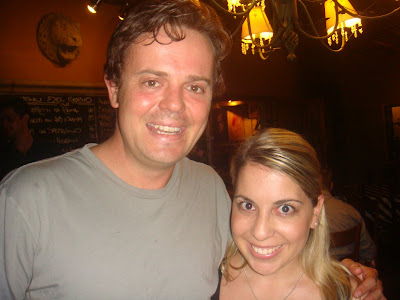 I also met some of the youngsters playing the Crazy 8 – thanks to my friend Chris who is tutoring them. Sweet guys with good manners – nice to see. They said they were really liking working with Jason Cope (District 9’s main Prawn) who plays Sparerib. Everyone also raves about Troye Sivan, who plays Spud, saying he is an excellent actor and a really nice guy. Not least of those raving about Troye is Cleese himself. He told me he enjoys acting with him – which makes for a change because he hasn’t really enjoyed acting in a long time. Troye – who was born in South Africa but lives in Australia – played the young Wolverine in the movie that Gavin Hood directed, and it looks like his star is definitely on the rise…And I hope to make him my next Spud interview.