Uncategorized
ESPN presenter and co-host of E!Entertainment’s The Daily Ten Sal Maskela is one lekker guy. He’s been travelling around South Africa with his famous father Hugh Masekela, filming a TV series called Umlando: Through My Father’s Eyes. It sounds great: father and son meeting interesting South Africans like photographer Sam Nzima and lion whisperer Kevin Richardson. It’s been airing on ESPN in the States, but there are plans for it to air here too, after the World Cup. I think that would be fantastic. Plus, I’ve also heard it’s in the works for locals to be able to see the great collaboration between U2 and Soweto Gospel Choir that’s currently airing on the sports network. 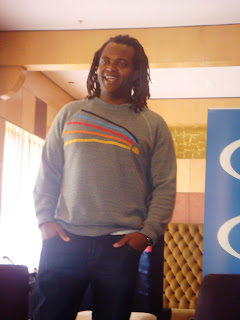 I’d spoke to Sal last year, ahead of the US elections, but only met him in person at the E! Oscars Afterparty in LA earlier this year. We then met up at a cool little spot in Santa Monica called the Lazy Daisy where he told me about his trip to come here for the World Cup. As a kid, Sal used to spend some time with his dad on tour. He says that when he was 19, he was a road manager for the Homecoming Tour that Hugh did with Sankomoto, so he got to see the country then. Now, it’s been a different journey of sorts, one he says has been filled with lots of laughter. We know his father as a legendary musician, who is he to Sal?

Sal’s mother is from Ghana so he had a pretty tough time choosing which side to support when they played USA. The interesting thing about that match is that it was such a record-setting game – ESPN says the June 26th match is the highest-rated and most-viewed match of the tournament so far, and the most-watched FIFA World Cup game ever in the US. Sal reckons the ratings post that game show that interest for Americans in the tournament is still there – even though Landon and the guys have gone back home.