Well, Ziggy, Robbie and Rohan Marley and me ;) 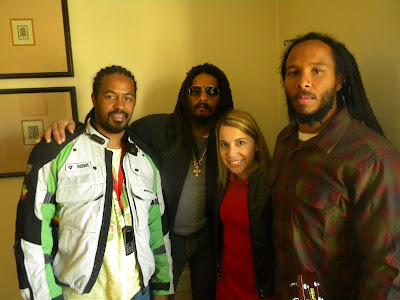 The three brothers, and sons of legendary Bob Marley, are travelling around Africa for a documentary series along the lines of Long Way Down and Long Way Round that Ewan McGregor and Charley Boorman did a few years ago. In fact, the series is produced by the same company that filmed their adventures. Marley Africa Roadtrip sees the brothers riding on Ducati Multistrada 1200 motorcycles. From speaking to Ziggy, it seems they’re taking things at a more relaxed pace, allowing the journey to lead them to their next destination, rather than having a set plan as the McGregor and Boorman did.
They’re also aiming to bring some of the Marley magic back to the continent. 30 years ago, Bob travelled to the continent and performed a unity concert in Zimbabwe. Ziggy says the World Cup presents a great opportunity to think beyond the tournament and how Africa can grow its next leaders. Or as he puts it: “The FIFA World Cup is just a celebration. Itâ€™s not a finale. Itâ€™s the road leading to the finale.”
Ziggy will be performing a free concert in Soweto in the next two weeks and the details for that are being finalised. But in the meantime, according to Ziggy, the brothers have been stopping over in some interesting places all over the continent and country – like Parys!