So I just finished reading Christopher Ciccone’s book, Life With My Sister Madonna, which I was reviewing for Jenny Crwys-Williams’ show on 702. I’d read another biography of the singer written by the British music journalist Lucy O’Brien a few months ago, but this was a totally different take on the Material Girl.

And what a take it is! This is no holds-barred look at what it’s like to be Madonna’s brother. To live in the long shadow cast by her superstardom. I found myself wanting to skip through the parts where he describes how his passion for dance came about or his first gay relationship, and just get to the parts where he talks about Madonna. And I suppose that right there shows just how far that shadow extends. We don’t really care about him – we want to know all about Her!

Ciccone alternates between loving words about his sister and bitchy remarks – like this one: â€œI hope that it is Kabbalahâ€™s lesson that she is not the center of the universe.â€ 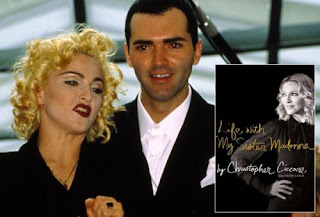 He details the fortune Madonna has made as the highest earning female singer in the world and contrasts it with his meagre living as an artist and interior decorator. He did the decor for many of Madonna’s houses, but she was terrible in paying him. In fact, in one instance, he bought a painting she had requested for about sixty thousand dollars, which he paid for expecting to be re-imbursed. But when he presented her with it, she told him she didn’t like it anymore and wouldn’t pay for it. And apparently Sotheby’s does not accept returns!

He also talks about her adoption of the little Malawian boy David Banda and the controversy that erupted. I remember rushing off to the airport when Madonna’s people were taking the child from Malawi to London via Joburg. There were about ten people looking after him and trying to shelter him from the paparazzi flashes (and my microphone!). Her brother says it was all done to keep up her image in the public and that she is indeed trying to “one up Angelina Jolie”. It’s that age-old debate of celebrities endorsing charities – who benefits who?

Speaking of celebs who’re into charity: what an amazing performance by Annie Lennox at the American Music Awards! I am so used to seeing her championing HIV/Aids for the past few years that I almost forgot how beautiful her voice is. She didn’t perform at the recent 46664 concert I covered in London, but only came on stage to compare pictures of a little child who wasn’t on ARV’s with one of another child who is on ARV’s (and posing cheerily with Annie) to urge support for adequate treatment to be in place. Her performance of Why that night was a wonderful reminder.