I had lunch with Eddie Murphy and Nicole Kidman today. Okay, so I was sitting at a different table but we were all at the same restaurant so surely that counts?

But that’s how it seems to be when one is dining at the Beverly Hills hotel, dahling. Stars walk in and out and it makes you do a second take. This is one of those Hollywood landmarks, having opened in 1912. It’s lunch guests have included the likes of Spencer Tracey and Katharine Hepburn to Frank Sinatra, to Steven Tyler, and Demi Moore and Ashton Kutcher.

And now me! I was having lunch there with the lovely folk from Grey Goose Vodka – who are throwing an official Pre-Oscar bash tonight at Soho House on Sunset (why is it that “Soho House” is such a lovely name for a hot spot no matter which country one is in?) Global Brand Ambassador, Dimi Lezinska was telling me about how he created the Inglourious Basterds cocktail but I kept getting distracted by Murphy, who I am convinced was looking straight at me ;) 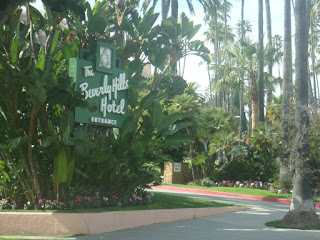 Love the idea of the Sunset Goose – a cocktail Dimi describes to be perfect for a Cosmo crazy girl like myself: “When you’re sipping it, standing on the top of Soho House on the Sunset Strip, it’s a perfect moment, when you think, ‘I have arrived’.”

More details after I have arrived at the party!