Wow, wow, wow! What an incredible moment to have witnessed: a ten-minute standing ovation for the local movie Life, Above All inside the Salle du Bussey here in Cannes. The film’s director Oliver Schmitz, co-producer Greig Buckle and three actresses from the movie – actresses Lerato Mvelase, Khomotso Manyaka and Harriet Manamela – were in the theatre for its world debut. 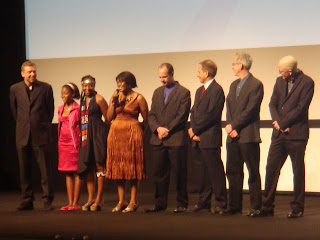 The movie is based on an award-winning novel called Chanda’s Secrets by Allan Stratton. It tells the story of a young girl who defies the community in which she lives to care for her mother, who has HIV/Aids. You may think, oh another film about Aids, but this is not just another film like that. Yes, it is about the disease, but more so about the story at the heart of it: the love of a daughter, her courage and strength, and how that inspires those around her. I am getting emotional thinking about it, because it is an incredible story. I sat in the audience with the rest of the film-goers and felt proud to be a South African in Cannes.

I have been looking for a film to blow me away, and this is it. 13-year-old Khomotso is a first time actor, so too is her co-star Keaobaka Makanyane. They are both from the small town of Elandsdoorn. Their talent is moving. Khomotso as the central figure of Chanda carries the audience with her on this journey she makes. Lerato and Harriet also do a superb job in their roles as Chanda’s mother Lillian and her neighbour Mrs Tafa respectively. Each shot is beautiful, and so too is the music of the choir singing, which fills the movie in many poignant places. 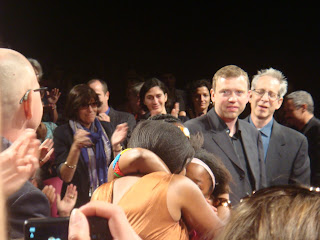 The actresses embrace during the ovation

Outside the theatre, I met legendary movie critic Roger Ebert, who told me, via his wife, that he loved the film and put his hand to his chest to gesture so. I told him I am a fan of his tweets and read them all the time (he has lost the ability to speak because of thyroid cancer). It was amazing to meet him in person as I have admired and respected him since I studied his writings while doing my BA in Film, Media and Visual Studies. He also said that he studied at UCT, which makes us alumni because I also studied there!

Back to the movie, the film’s producer Greig says they’re still working on the details of a release in South Africa, but it should be before the end of the year.