There’s a glorious scene in Robin Hood where Russell Crowe as the protagonist discovers part of his heritage, and it has to do with these words:

Well, the “lions” of the opening day and night of Cannes are the Oscar-winning star and his fellow Oscar winner Cate Blanchett. The kicked off the film festival with a press conference for the movie, in which the two shared a lovely banter between them – talking about kissing scenes in the forest – and then Cate taking on the role of journalist to Russell, asked him a question she knew he wanted to answer. 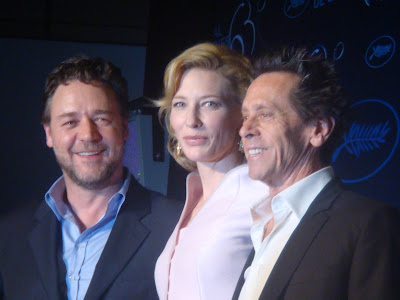 Russell Crowe, Cate Blanchett and producer Brian Grazer
Director Ridley Scott isn’t here to see his film open the fest because he’s recovering from knee surgery. It’s a great pity because I was looking forward to interviewing him and seeing who the man behind the lens is. Ah well, Russell kept us entertained enough. He has no problem telling a journalist who asks a question he’s answered before that he feels like “he is repeating himself, repeating himself” or expressing his views on how he thinks the monopolization of the media is something a Robin Hood of today’s time would have to conquer.
Perhaps a lion of a different kind is Tim Burton, head of the jury that will decide who gets the Palme d’Or at the end of the fest. In the second presser of the day, he explained what’s going to guide their decision. Nothing, really.
Well, he means the panel – which includes the gorgeous Kate Beckinsale and hottie Benicio del Toro – won’t be going in with any pre-conceived ideas about what they want the films to be. He says they want to be surprised, and “feel the films, then discuss them and how they affect (us) intellectually and emotionally.” 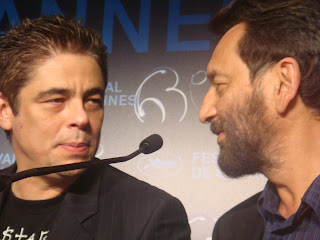