And that’s it folks. Another Cannes Film Festival done and dusted for another year. In spite of all the global financial woes, it was still an eventful festival, with many a deal signed and many a connection made.

A big thank you to Amarula who helped send me to cover the world’s biggest and most popular film festival. It really doesn’t get any better than this when it comes to movie-making and filmstars. Highlights for me this year include:

* Seeing the strides South Africans are making in terms of getting their film projects and ideas out there into the world. I am particularly looking forward to seeing our own animated feature on the big screen, as well as the ‘Spud’ movie.

* Sharing a laugh with Robert Pattinson: This guy is such a cutie, but he really doesn’t have it all that easy. Wherever he went large crowds of girls followed and screamed their hearts out for him. Speaking to him, I found him to be a really down-to-earth guy who just likes having fun and playing music.

* Bumping (literally) into Joshua Jackson – aka Pacey from ‘Dawson’s Creek’ – he was wondering around the Carlton hotel where his girlfriend Diane Kruger was giving interviews for ‘Inglourious Basterds.’

* Being among the first to see Quentin Tarantino’s newest film, ‘Inglourious Basterds’ and witnessing firsthand the passion he has for making films. 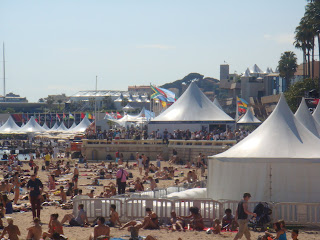 * Feeling the magic that descends upon Cannes this time every year – there really is a certain je ne sais quoi in the air. A floral smell envelopes the Palais de Festival which is the hub of it all, and there is an excitement that fills it too. Don’t get me wrong, it can be crazy dashing from one place to another and trying to hold your own when 3 999 other journalists are trying to get the same story as you, but it’s worth it in the end.