Itâ€™s been a concert-filled three days. Top of the list definitely was Wyclef Jeanâ€™s â€œprivate and exclusiveâ€ gig at the Bassline. To say he rocked the party is the understatement of understatements. This man performed for over three hours. I have never been entertained like that before! 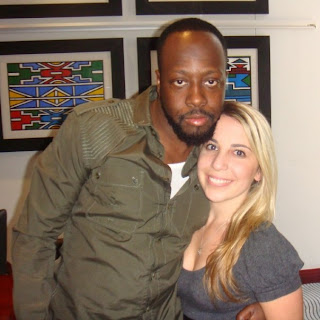 – The way he cheekily sauntered onto stage, with that naughty smile that he wore throughout his show â€“ together with the lower-than-low-slung jeans.

– He started the show â€“ as he ended it three and a bit hours later â€“ with a heartfelt song penned in honour of Lucky Dube.

– The version of Lil Wayneâ€™s Millionaire he adapted, Wyclef style, complete with his own take on Wayneâ€™s lil voice.

– During my fave track (next to Hips Donâ€™t Lie and Gone Til November) Dollar Bill he jumped right into the crowd, singing the chorus over and over, before stopping and starting an impromptu
â€˜
– When he made us fling all sorts of paraphernalia in the air during Carnival â€“ and then Clef went on to do flick flacks and head stands just after that!

– Towards the end, when he ran into the crowd (again), and made his way to the sound desk at the top of the stairs. He stood on the beams and hoisted himself up onto the rafters, doing a few pull-ups, before sliding halfway down the banister, positioning himself in the crowd, and asking for his guitar and micstand to be brought to him. He then performed a tender version of Redemption Song, which the crowd lapped up.

In the hype of it all, I laughed (especially when he did the flick flacks), I cried (during his version of Pink Floyd’s Wish You Were Here), and I shook my hips like I love to do! He promised heâ€™d be back to play a stadium size show. I can guarantee, itâ€™ll be the best couple of hundred bucks anybody ever spends on a concert ticket.

Meeting him was an experience in itself too. I rarely get star-struck, but Wyclef had my stomach doing flick-flacks. I have long admired his music, since my brother first played Gone Til November for me. And just a few days ago, I was thinking about how much I would like to see him perform. Can tick that one off the list!

Staying on a hip hop tip. The Rootsâ€™ drummer Questlove was in town to play a DJ set at Carfax on Friday night. The line-up was stellar â€“ Tumi and Papercut, 340 ml, Zubz, Kenzhero, Richard the III and so much more. By the time Questlove came on, the place was absolutely packed.

It was right about then that someone decided to screw things up.

Apparently, someone in the VIP area above the dancefloor threw teargas or pepper spray onto the crowd. All I know is, I started coughing badly and my throat was stinging. I looked around and realized it wasnâ€™t just me. We all evacuated outside. I was fuming. It had been a stressful week and I had been looking forward to this gig. Now all I wanted to do was go home and forget about it. My friend Daniel tried to convince me otherwise, saying that it would be a waste to let whoever did this rob me of the chance to see Questlove in action.

Eventually, I decided to stay and ventured back into the club. I enjoyed Questloveâ€™s set from then on. He really surprised me â€“ mixing the likes of Justin Timberlake with Jackson 5, contemporary hip hop with old 60s classics. Of course I went crazy when he played my fave, Seed.

And lastly, Maroon 5, with â€œspecial guestsâ€ One Republic at the Coca Cola Dome. I missed Goldfish and the Parlotones because the show started quite early, but I am sure they rocked it in their usual kick-ass style.

One Republic were nice enough – doing the South-Africa-is-the-best-country-weâ€™ve-played routine with genuine gesture. The set was mostly down tempo and laid back. But when they closed with Apologise they gave me goosebumps. Still such a beautiful song.

Maroon 5 were good. Not mind-blowing but enjoyable. They played most of their hits within the first few minutes of the show â€“ and I was like, now what?! Adam Levineâ€™s cover of Wicked Game wasnâ€™t too shoddy and it was nice the way he moved into â€˜She Will Be Lovedâ€™ straight after.

Ended up meeting most of the band afterwards â€“ and had drinks with James, Matt and Micky. It was nice to just chill with a band and not talk to them only as part of an interview.