Sure he may not be the hippest cat to visit our shores in recent times, but there’s no denying Lionel Ritchie is legendary. This man has won an Oscar (for Say You, Say Me from White Nights) and Grammy awards (a handful), yet he is as warm and approachable as if he were an old friend. Plus he could show celebs of today – his daughter Nicole included – a thing or two. 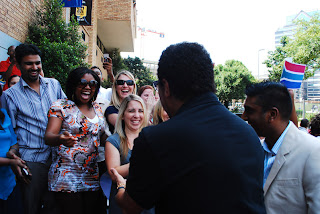 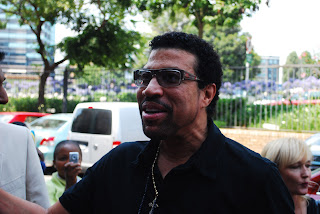 He looks good for a 59-year old, really healthy – like he’s taken care of himself (or had lots of work done!). His charismatic personality also makes him a likeable guy. 94.7 Highveld Stereo’s Rude Awakening held its version of Idols – called “Lionels” – where each member of the team sang Lionel’s hits for him to judge. Lionel played along so well – such a good sport! When Sam Cowen threw off the wig she was wearing to declare how much she loved him, he went along with it – even running around the room so she could chase him. When Bongani Nxumalo sang All Night Long he joined him to make it a duet. And when, at a tree planting ceremony, he made a whole lot of journalists move over to the other side of where we’d been standing, he apologised – genuinely. Not that he even needed to. He’s Lionel Ritchie, he can go where he wants, right?

Contrast that to some of the younger celebs I’ve had to work with, er, I mean, chase. Ex-Destiny’s-Child-now-solo-singer Kelly Rowland comes to mind. Last week she kept journos waiting at least two hours in the evening for a press conference that still entailed watching an hour-long documentary before she would speak. Knowing what the doccie is about, I understand. Walking into the venue and then going to have some dinner while we all wait, I don’t.

Hmmm, wonder if Respect is a song only the likes of Aretha’s generation knows the lyrics too…?