Uncategorized
One of the great things about going to the Cannes Film Festival (because there are just so many horrible things about going to the South of France) is that you get a sneak peak into some of the films that are going to be coming up in the near future – those that are finished and those that are still in early production stages. It was in May that I got wind about two big movie stars heading to South Africa: Oscar-winner Halle Berry and the gorgeous Gerard Butler. They’d both be working on two different films in different locations. Halle was to film Dark Tide in Cape Town, which meant I’d have limited access to finding out more about where she’d be and all of that. So when an opportunity to go to Cape Town came up, I scheduled in some time to find out more about the film and its stunning star. 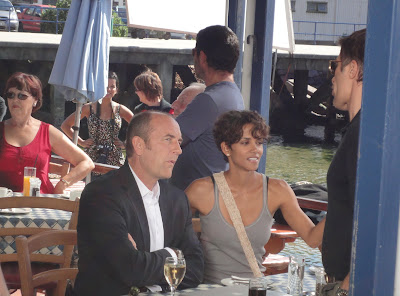 On Friday I went to Bertha’s in Simonstown – a restaurant that became a mini-Hollywood set when the cast and crew of Dark Tide spent the day filming there. Halle, Olivier Martinez and British actor Ralph Brown (Alien; Withnail and Us) together with South African actor Luke Stein were all shooting scenes in the restaurant. I couldn’t really hear what was going on but it seemed that father-and-son Ralph and Luke were having lunch when Halle and Olivier come in and sit down to talk.
Halle had a sore throat so when she did come say hello, she was half-whispering. In between takes, she laughed with the crew and hugged the wardrobe designer. Oh, and I don’t mean to be starting rumours or anything, but she held onto Olivier quite a lot when the cameras stopped rolling – rubbing his back and hugging him.
Hmmm…perhaps this is a watch-this-space hookup with Kylie’s ex in the making. 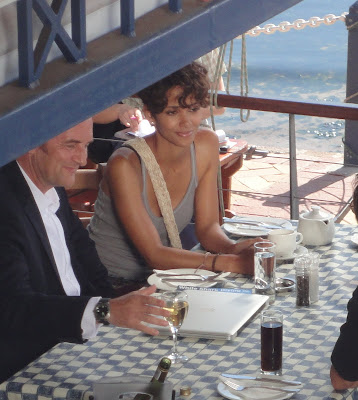 There was talk that Halle would pop up at the Cape Town Fashion Week Afterparty…but she did not. One can understand why she would choose to spend her 44th birthday with her family after a day of shooting. Halle wraps up filming in Cape Town at the end of this week and then heads to London to finish the movie.