Woke up early, 2am-early, to go to work and get the latest on the Grammys. As I was getting dressed, had E!News Red Carpet on, and heard that Chris Brown had apparently been taken in for questioning, and that neither he nor girlfriend Rihanna would be at the ceremony. Word is he either got into a fight with someone else, or he got into a fight with Rihanna…Woaaah…Another Woaaah! moment was MIA almost ready to pop out her baby, performing alongside Jay Z, Kanye West and T.I. Really, she was literally ready to give birth, even telling Giuliana Rancic that she had someone on standby if she did go into labour. Then again, as a colleague said to me, if she had the chance to perform at the Grammys she wouldn’t let being pregnant interfere in that either. And she was performing with Jay Z et al! 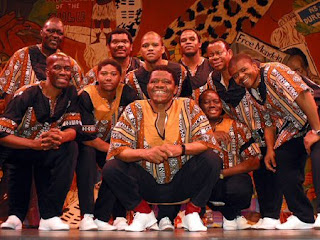 Otherwise, a bittersweet moment for the South African artists. Soweto Gospel Choir was up for Best Contemporary World Music Album, but lost out on that nod. It would have been their 3rd win in a row, following the last two year’s fantastic showing…but good on Ladysmith Black Mambazo – 3rd win, amid notching up 13 nods over the years!