Two years ago before heading off to the Cannes Film Festival I stopped in London to cover the premiere of Sex and the City – The Movie, and interview Carrie and the girls. This time around, it’s after Cannes that I have swung by London to do the same thing…for the sequel to the hit film. The interviews take place at the stunning Claridges Hotel in Mayfair. It really is a surreal experience. Anyone will tell you I am a huge fan of the show, so it’s great to be able to sit down with the four actresses in front of me, plus the man who brings their characters to life, Michael Patrick King. 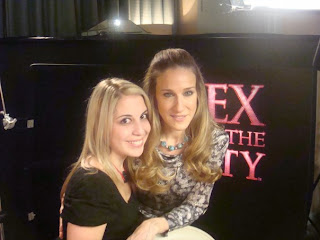 This was the pic from last time. Sadly, there was no way of getting pics this time around. That’s one of the things they are super-strict about. The other is time. You are told you will have exactly 5 minutes with each person. Then they shaved that to be just four minutes. That’s about three and a half questions – if you’re lucky maybe four. It can be a tad overwhelming because there are so many things you want to ask, but just as soon as you get going, the PR people are signalling for you to wrap up. So even if Kim Cattrall (Samantha) is telling you about who did her gorgeous, reflective nails in the movie, they will be edging you out the door, and even cut her off from speaking. 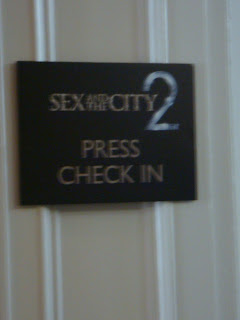 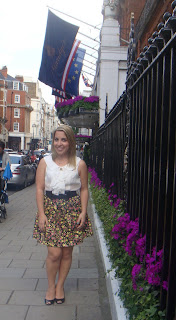 But there were some memorable moments. Michael Patrick King saying he remembered me from the last time around, and then going on to talk about how Sex and the City 2 is kind of like a World Cup for women. Kim Cattrall (Samantha) talking about how she made menopause sexy, and Cynthia Nixon telling me that the opening scene of the gay wedding was personal for her because she and her fiance, Christine Marinoni, aren’t able to get married in New York because it’s not legal yet.
Chris Noth, who plays Big, wasn’t as charming as the man we see on the screen, so that was a bit of a damper. But seeing the gorgeous Sarah Jessica Parker and Kristin Davis (Charlotte) in their dresses was fabulous. Shame, Kristin called me adorable because my feet couldn’t touch the floor (even in heels I am still short!). She visits South Africa quite often, through her work as an Oxfam Ambassador. Chris, too, said he’d just come back from there and promised that the next film he shoots will be in Cape Town.

After the interviews, I got into the lift and the actor who plays Burger, one of Carrie’s past loves, was standing there, holding his luggage. I was stunned for a moment because I forgot that his name was Ron Livingston and the last thing I wanted to do was call him “Burger.” Nonetheless, he said he was in town for a movie awards ceremony, and it was just coincidental that his former flame (haha!) was upstairs. 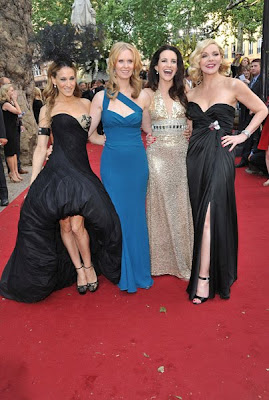 The gals at the premiere in Leicester Square, London. SJP in Alexander McQueen in honour of her late friend

I’ve already been asked if there’s going to be a Sex and the City 3, so I had to ask the question to Michael, but he says the storyline will determine that: “how to make something that’s so familiar fresh”. If there is another one fantastic. If not, I will continue to play the series on DVD, because that never gets old.