I am waiting at for the next flight out to . A storm delayed my flight from SA, so I missed my connecting one out of here. I had planned out what I would do when I got to LA pretty well, I thought. Iâ€™d arrive, take a shuttle to the car hire, get the car Iâ€™d pre-booked and head out for the almost 3 hour drive to where Michael Jacksonâ€™s Neverland Ranch is. That was where a public viewing of his body was set to take place on Friday morning local time (SA time Friday afternoon). It had the makings of a great morning drive live crossing for the stations.

But the family had other ideas. It backtracked on that one and the fans that had already started making their way to Neverland had to make another plan. And now, I too have to make another planâ€¦
There are a few other places people have been gathering. One is the Encino home of Michaelâ€™s parents â€“ thatâ€™s where Kay Burley and the rest of the worldâ€™s media have been camping outside of â€“ and then thereâ€™s the Hollywood Walk of Fame where Michael Jacksonâ€™s star is, and also the rented home where he collapsed.

Iâ€™ve just heard that that the latest news on the funeral is that it will be held on Tuesday at the Staples Centre. Apparently AEG – the guys behind the comeback concerts Michael was meant to do â€“ own this huge venue in downtown LA which is home to the LA Lakers basketball team. Itâ€™s also been said that they will help foot the bill â€“ which is expected to be costly. Thereâ€™s also talk of an entry fee, which makes me wonder how much someone would charge to go to someoneâ€™s funeral. Even if that someone is Michael Jacksonâ€¦

Itâ€™s the Fourth of July weekend here in the States so the airport is a buzz with people going on holiday. The bookstores are full of magazines and newspapers with MJâ€™s face on them. Time, Newsweek, People â€“ all have commemorative editions of his life. The tabloid OK! has a headline screaming, last pics of Michael. Great â€“ just the kind of tact weâ€™ve come to know these kinds of publications for. 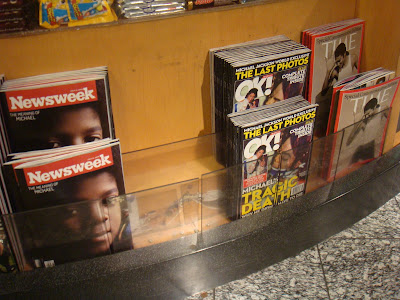