Miss N
It’s being billed as the film of the year and it’s no wonder. Walking out of a preview screening of District 9 I thought about how this is unlike anything we have ever seen come out of South Africa. By now, I’m sure you’ll have heard the buzz about the movie – how it was directed by South African Neill Blomkamp and produced by Peter Jackson, after the whole ‘Halo’ concept fell apart.

Using a pseudo-documentary style mixed with realism and fiction, the movie is about an alien ship that docks, not in New York, not in Washington, but in Johannesburg (gotta love it!), and how the residents try to contain its inhabitants who are condescendingly called Prawns (and as Gus Silber says, this could be in tribute to our very own Parktown Prawns). Much of the film was shot during the xenophobic violence that flared up last year so some of the scenes are very close to home, but the story is cleverly spun around and it works.

District 9 truly blew me away! And I am not a sci-fi kinda gal. It was smart and and had me on the edge of my seat throughout the entire film. Part of the reason I think I was won over is that at the heart of all the gunfire and CGI is the main character Wikus van der Merwe. He’s played by Sharlto Copely in his first big acting role. When he laughs, you laugh with him but when he becomes terrified, you become terrified. I think Copely is outstanding in his breakout role.

The film has also had an effective marketing campaign – first via the online viral trailer that was released and then also the on-thr-ground bus and seat signs such as these that I saw in the States. 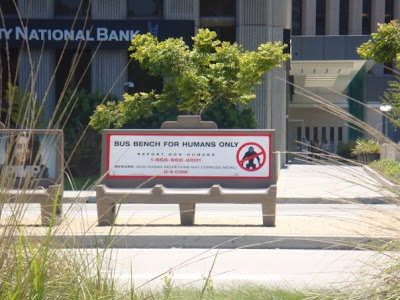 Check out the trailer here. The film releases locally on the 28th of August.