A few posts ago, I expressed my ambiguious feelings about Die Antwoord where I said I was hoping the group would stick around long enough for me to make up my mind about how I felt about them. Much has happened since then, namely that the band signed a major deal with Interscope Records, home of Lady Gaga and Eminem. They’re committed to 5 albums so have to be around for at least that long.

On Saturday night the group performed at the Bassline before heading back overseas on the second part of their world tour. They also previewed the music video for their new single, Evil Boy, which features a young Xhosa rapper called Wanga, as well as a whole lot of penises. These made their way onto the stage too – see Exhibit A and B below. 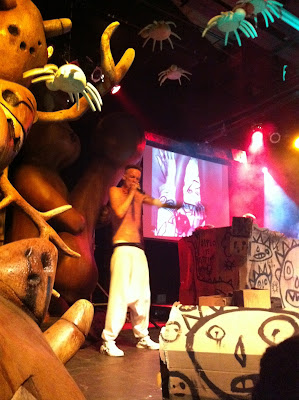 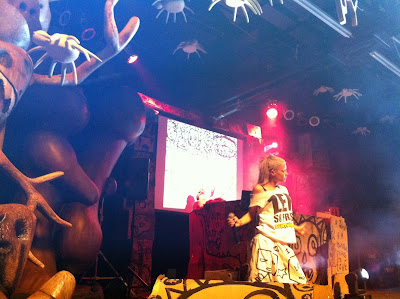 The video is as controversial as you’d expect from a group that uses the words “poes” and “naai” as easily as “please” and “thank you”. But the track is slick and US producer Diplo has worked in his magic into a tale about circumcision and “big loving”. It’s as hot as Die Antwoord’s stage show, which is filled with non-stop energy, fast raps and great costume changes. Oh, yeah, and Ninja’s prosthetic District 9 limb. He showed me later the D9 tattoo inscribed on the inside of his bottom lip. Fans to the max! 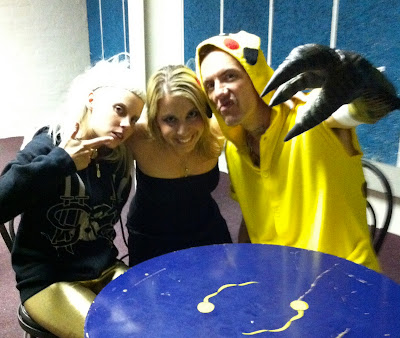 As for me, I had fun and that’s that. I think I am going to stop over-analysing the band too much. Although I am still intrigued by things like meeting an American girl who has flown over here just to watch the band because she’s “seen everything else out there, from dubstep to industrial, and there’s nothing like Die Antwoord”.