I spot his Springbok sweater before I spot him. In the foyer of the Beverly Hills Four Seasons â€“ the one where Pretty Woman is set â€“ Sharlto Copley is waiting for me. â€œGeez, when I said you should try come to the Oscars, I didnâ€™t realize you actually would!â€ he chuckles as he we find a spot to sit down. South Africa had a strong presence at this yearâ€™s ceremony: District 9 was nominated for four Oscars â€“ along with two nominations for the Madiba-inspired Invictus â€“ so it was important for me to be there. Fast forward a few months later and Copley is spotted at airports around the world, promoting his latest film, the action-packed, star-cast The A-Team. One set of paparazzi-like pics shows him arriving at LAX wearing the green Springbok sweater again. â€œI love that top,â€ he says to me when I tell him about the gossip site that published the photos. â€œItâ€™s so comfortable to travel in so I wear it all the time. I guess I wonâ€™t be any more,â€ he says, ruefully. 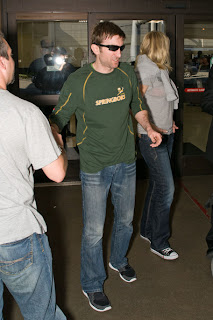 Much has changed for the Joburg-born Copley. For one, heâ€™s added a number of nominations to his CV: Teen Choice Award nod for Best Sci-Fi Actor, MTV Movie Award nod for Scared as S**t Performance, and of course those Academy Award nominations. He won the Favourite Hero and Best Performance of 2009 awards at the IGN Summer Awards, but whether or not the 36-year-old has scooped the awards heâ€™s been up for, Copleyâ€™s gained a fair bit of exposure from all the attention. Being part of a big-budget Hollywood film meant that his life has been spun into the global orbit of international stardom. From cardboard cutouts of him in a cellphone shop to gossip websites lamenting the fact that he has a girlfriend, Copleyâ€™s business is now the stuff of international interest.

â€œIâ€™m trying really hard not to do anything thatâ€™s going to perpetuate that,â€ he says earnestly. â€œThatâ€™s not a place Iâ€™m interested in being. I really want to focus on the work. Iâ€™m not interested in this celebrity culture where people create drama out of your life for entertainment. Iâ€™d rather just create drama for TV, or movies,â€ he chuckles.

Listen to the rest of the interview here…