Cannes may be a celebrity-filled film festival but it’s also a cerebral festival, with movies that make you think. I watched the controversial documentary about the earthquake in L’Aquila that slams Italian Prime Minister Silvio Berlusconi for his handling of the crisis as a means to boost his popularity. It’s called DrAquila and is directed by satirist Sabina Guzzanti. 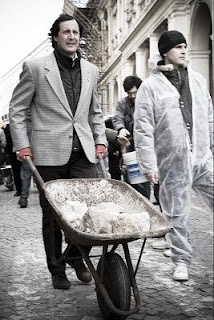 Through comedy and stark realism, as well as testimonies from people who lost their loved ones in a tragedy, which Guzzanti shows the government was well aware of before it happened, the film portrays the Italian leader as a man only concerned with his image and not the people he is meant to lead. Instead of helping re-build the city post-quake, he re-builds his ego and a false impression among the people.

It made me remember that in South Africa we’re not the only ones with shameful politicians who are corrupt and embarass us. Berlusconi makes both Tiger Woods and Julius Malema look tame – with his sex scandals and ability to say silly things at inopportune moments. I can see why the Italian Minister of Culture boycotted the festival because it was screening this documentary – DraQuila holds back no punches.

I was interviewed by an Italian newspaper journalist as I walked out of the cinema, asking me my reactions. The thing is this, you hear about Berlusconi in the various media reports, but a film like this pieces it all together and gives one reason to fear the fact that this leader is in power – yet again. “A dictatorship without the torture”, as one interviewee in the movie put it.

The most poignant moment comes from a journalist who lost his two children in the earthquake. He believed the lies that were spread as information from seismologists that another earthquake was not going to happen, when they knew one would. He told his two children that too, and they listened to him when he said not to get up during a tremor as it wouldn’t be a problem. And so they lay in their beds as the city fell.

Then, as happens in Cannes, I had to flip the switch totally and go see another film at the total end of the scale – Step Up 3D. That’s another thing to love about Cannes – you get allsorts! Director John Chu is here with his movie about the dancers who do-or-die, and I’ll be speaking to him tomorrow.