One of my favourite pavillions to visit at Cannes each year is the Cinema du Monde, or Cinema of the World. Truth is, it’s all cinema of the world here in Cannes, but I love how it all comes together in this space that overlooks the Majestic Beach and has such a friendly warmth about it. It’s the pavillion where France supports African film. Also, Radio France International broadcasts from here, and in the past, I have taken part in interesting on-air discussions, led by David Page, who is, sadly, no longer with RFI, around issues reflected on film. 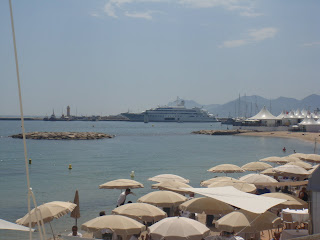 The French Embassy has been a staunch supporter of South African arts.Cannes is just one example of the ways in which they try to help develop local talent, by sending filmmakers to take part in all that happens there. And, it’s thanks, in part, to them, that this journalist can report on the fantastic stories that come out of this grande dame of festivals. The co-production treaty signed between South Africa and France – which has been in the pipeline for ages – will set a whole new ball in motion to help foster cultural ties between our two countries and exchange skills too. Viva Le France! Viva Afrique du Sud!