The Red Carpet has been rolled up and packed away for another year. The 63rd edition of the Cannes Film Festival is finished. Last night’s closing ceremony was beautiful – with mistress of ceremonies Kristin Scott Thomas doing a fabulous job in a gorgeous lime-green dress. The big winners are here, including the Thai director who has given the Icelandic volcano a run for its money with his name: Apichatpong Weersethakul. 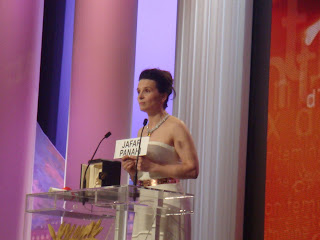 There was a jovial mood about the ceremony, with much laughter as Jury President Tim Burton kept forgetting to stand up and announce each winner after a actor or actress had come on stage to introduce the category. But there was also a solemnity to the proceedings when Best Actress winner Juliet Binoche took the placard of Iranian filmmaker Jafari Panahi from the seat it had been placed on, as she walked up on stage to collect her prize. He has been on a hunger strike since being imprisoned at the beginning of the month. He was arrested for his opposition views, which he displays in his films, and so was not able to take up his place on the jury. 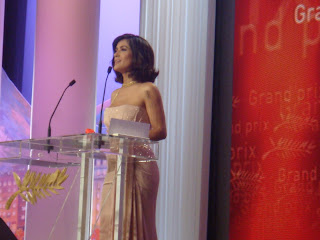 Salma Hayek was just stunning in her gown and should-skimming hair. Between her, Penelope Cruz and Kate Beckinsale there was enough glamour in that theatre to last until next year.

Will reflect on the highlights of the fest as soon as I can – for now, Amsterdam is calling.