Have lost a bit of my voice, which is not good for radio, but thatâ€™s what happens when you try to keep up with Snow Patrol at the Coke Zero Fest. Missioned to Lourensford Wine Estate for the event yesterday. The hour-long drive there was so worth it, though. The backdrop against which some fine bands took to the stage was just breathtaking. When the camera panned across the crowds so that we saw a view of what the artists on stage saw, with the mountains in the background, I thought to myself, this must truly be one of the most scenic places they had ever performed before. 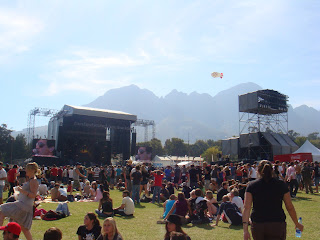 Unfortunately, I missed many of the local acts as I had an interview with Snow Patrol at their hotel. I did get to see the Dirty Skirts and Aking rock out. Heard Cassette and Zebra and Giraffe were on top form. Panic at The Disco played many of their hits off their first album, which has those fabulous little ditties with choruses like â€œI chimed in with, havenâ€™t you people ever heard of / closing the goddamn door â€“ no!â€ The diminutive sized band packed a punch.

Oasis were cool enough. And I do mean, cool. Liam Gallagher sauntered on stage and pulled an expression that said, you want some of this, huh? Well, you canâ€™t have any of it. Most of the crowd around me chatted amongst themselves through most of the set â€“ with one guy even relieving himself right there in the crowd, through his cargo pants. When the Brit rockers got onto Wonderwall, the crowd sang in unison. Momentum grew, and the band moved onto Donâ€™t Look Back in Anger and Champagne Supernova. Beautiful.

The darlings of the night had to be Snow Patrol though. They gave everything they had in their performance â€“ just as I heard they did in Joburg. Wow! Lighting, video projections, and most importantly, the heart-fuelled passionate singing of Gary Lightbody. This man wooed Cape Town and had them in the palm of his hands. From the moment the groupâ€™s Take Back The City shone up on the screen and the names of all the places they had performed flashed upon the screen â€“ â€œâ€¦and now Cape Townâ€ the band could do no wrong. They played for over an hour â€“ slow-burning ballads, fast-pumping war-cries. With the charismatic Lightbody at the helm of it all. Absolutely LOVED when they did Run and the whole crowd sang the chorus, Lightbodyâ€™s face lighting up at the sight. Crack the Shutters, Chasing Cars, and You’re All I Have were other highlights. 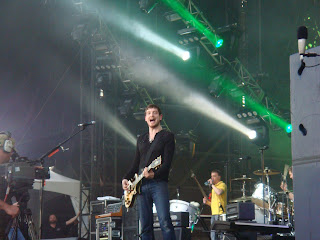 Met two band members at the interview â€“ drummer Jonny and the gorgeous Nathan, who seemed to be suffering a little from a cold. Great interview in which they told me their plans to climb Table Mountain and go shark cage diving. Panic at the Disco were also a friendly lot. Spencer showed me photos of the game drive theyâ€™d been on â€“ and saw four of the big five.