Miss N
Location: OR Tambo
Destination: Michaelhouse, , Kwazulu Natal
Assignment: Interview John Cleese, aka The Guv in Spud
So this assignment is only a plane ride, a scenic car drive and a â€˜funny walkâ€™ away. I am looking forward to meeting one of the worldâ€™s most revered actors and funniest comedians. John Cleese gave us Monty Pythonâ€™s Flying Circus, Basil (I can still hear his wife in the series calling his name in her shrill tone) in Fawlty Towers and Archie Leach in A Fish Called Wanda. Oh, and he also married Karen in Will&Grace!
It took a lot of planning and coercing to get this interview. I have 20 minutes with him â€“ but I will make them count. I was in when I first heard John Cleese was being lined up as the big name attached to the movie in the making. I had to keep it under wraps until it was confirmed a few months later. The first reaction from most people â€“ including the author of the best-selling series himself â€“ was that Cleese was the perfect person for the role. A match made in heaven. I want to know if Cleese himself felt this as well â€“ in fact, how did he come to be involved in the project? 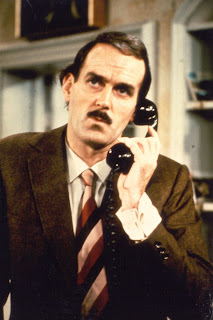 A few little Did-You-Know facts about The Cleese that I Did-Not-Know:
–         his familyâ€™s surname was originally Cheese, but his dad changed that when he went to the army
–         he is 70 years old (I knew he was somewhere in that bracket) and is dating a woman who is almost half that (39)
–         he has always been tall â€“ at school at the age of 13 he was well over 6ft
–         he studied as a scientist and taught the subject at his former prep school
–         he was a rector at the
–         his voice can be downloaded for directional guidance purposes as a downloadable option on some personal GPS-navigation device models by company Tom-Tom
–         He is apparently working on a stage play of A Fish Called Wanda