After making friends with the GPS and Los Angeles’ highways, I found myself at the offices of Revelations Entertainment in Santa Monica. That’s the production company Morgan Freeman owns together with Lori McCreary. It’s quite an unassuming building – the office block shares its space with a yoga studio and there was a farmer’s market taking place outside. Walking inside, I noticed it was pretty low-key too. There’s a lounge set-up inside, with a giant TV, and it felt a little like I was on a set (yeah, acting alongside Mr Freeman!). Lori says they try out technology in here. There are pictures of both Morgan and Lori from years gone by on a mantle piece and a hard poster of The Shawshank Redemption. Other than that, you’d never have known Morgan Freeman “works” here. 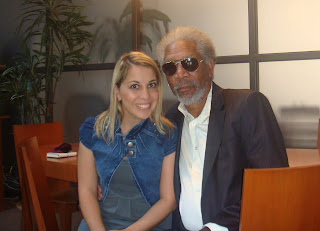 His hand is still in a soft bandage-like hold from when he had the car accident in 2008. He told me he’s still suffering from the nerve damage and may have to go for surgery. It was great to be able to have interviewed Freeman in South Africa, and then again here in LA ahead of the Oscars – a kind of nice circle. In fact, I told him I had also run after him at the airport when he was in South Africa for the Sithengi Film Festival. He said to me, that when these kinds of things happen, it means I am bound to run into him again soon – haha! He’s always such a great interview, and I still am in awe of him every time I sit in front of him.

We spoke about his being nominated 3 times before and how the experience has changed, and the whole process “winds down” as the years go by. While Lori was telling me about her outfit for the Oscars, Morgan was nonchalant – uttering the phrase: “a tuxedo is a tuxedo is a tuxedo”, to which Lori replied, “that’s because you look good in any tuxedo!”

Freeman and Lori are planning on coming back to South Africa very soon – for the World Cup and another movie, so we haven’t seen the last of this Oscar-winning star! 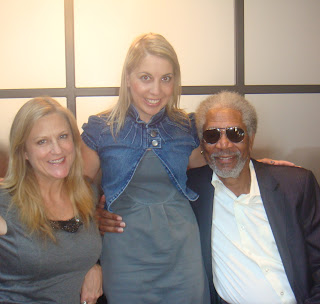 Lori, Morgan and I “on set”