Miss N
I wrote this before I went on holiday but kinda forgot to post it ;) I’m hoping you’ll allow me one pretend-dumb-blonde-moment a year!


It’s been a bit of an odd year – ups, downs, recession and hard times. But the year has been filled with many a highlight for me. Allow me to share just a few:
** SA film making waves


I loved the hype that local films got this year. Hype means people talking and sends many a curious soul to the cinema. Sure, there’s the chance the hype might mean possible disappointment, but District 9 and Invictus managed to win over audiences and soon, one can only anticipate, awards too. The glimpse of upcoming local films in the pipeline that I got at the Cannes Film Festival keeps me excited. Great animated flicks and the adaptation of the bestseller Spud are just a taste of what’s to come. Hitting the big screen in 2010 are the Bang Bang Club (in which I have a one-line role!) and Skin, both based on true local stories with a mix of local and international stars. 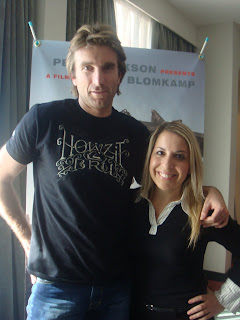 Sharlto Copley, aka Wikus van der Merwe from District 9
** Mandela Day in New York
Some may have questioned why the first Mandela Day was held in New York, but I thought it was a fantastic way to spread the message behind Nelson Mandela, the man and his charities. One of the most heatwarming moments for me was to see groups of children from underprivileged schools in New York listen to stories from a book of Mandela’s favourite folktales and learn about what he did for South Africa – and indeed, the world. Sure, he is known across the globe, but surprisingly, many people don’t know exactly what he did. And the activities leading up to this day – encouraging the public to give of their time in service – helped a younger generation beyond this country know who he is.
New York is the centre of the media world and the word was spread even further.  It was amazing to see dozens and dozens of commuters pass through Grand Central Station and meander through an exhibition of his life. I also felt such a sense of pride watching the likes of Freshlyground, Thandiswa,  Jesse Clegg, Vusi Mahlasela and Soweto Gospel Choir perform on the bill of top international artists. Okay, and I’m not going to lie, meeting Stevie Wonder, Bill Clinton and Morgan Freeman was also a highlight! 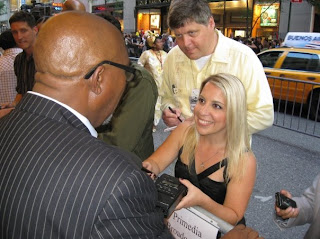 On the Red Carpet interviewing Sipho Mabuse
** Michael Jackson’s Memorial in LA
A few days after the news of Michael Jackson’s death stunned the world, I was on a plane bound for LA to cover his memorial. It had been said the event was to be bigger than Princess Di’s. But the decision to limit the number of people at the memorial meant that it was not going to be a true reflection of just how many fans were left grieving. I learnt the true meaning of fanatic – and controversial character that he was, it was undeniable that MJ’s passing was the end of an era. Being part of the memorial where MJ’s daughter Paris humanised the superstar as her father was something I will never forget. 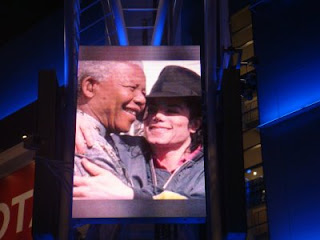 Outside the Staples Centre, the night before MJ’s memorial
** Music high notes
Being able to watch The Killers in concert was the musical highlight of this year for me. Meeting them too, an absolute high! Meeting another music favourite Damien Rice was memorable for another reason. I realise that I had not actually captured the experience here but when I asked for a picture or an autograph (which I hardly ever do, but I am that much of a fan) he declined, saying that the music doesn’t come from him, “it’s like a shit, that’s just there”. He hugged me and then left me there, standing in the foyer of the Carlton Hotel in Cannes, stunned. Oh well, at least I finally met the guy. Glad I also finally got to meet and see my fave Greek singer Mixalis Hadjiannis in action too.
I’ve already mentioned the Mandela Day concert where Soweto Gospel Choir backed almost everyone on stage. They were also brilliant at the Oscars, performing the nominated song from the movie Wall-E. Snow Patrol and Panic at the Disco were great at the Oasis concert (!), while the impromptu jam at the opening of the One and Only Hotel in Cape Town, between Bebe Winans, Mariah Carey, Hugh Masekela, where Marisa Tomei, Matt Damon and Sharon Stone joined in was such fun. Ending off the Cannes Film Festival with a DJ set by Will.i.Am was pure perfection, and another highlight was the Redbull Soundclash between the Dirty Skirts and Tumi and the Volume at the Carlton Skyrink – more please!! 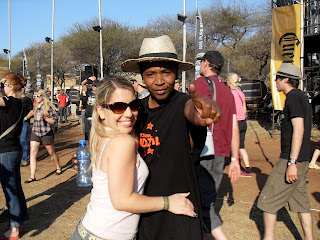 At Oppikoppi with Kwani Experience’s PO
Things I couldn’t have gotten through 2009 without…my Sex and the City DVDs for nights when I couldn’t sleep, Grey’s Anatomy, Later…with Jools Holland on BBC Entertainment, music from my brother’s iPod, the Garmin that came with the hired car in LA, Reese’s White Chocolate Butter Cups (yum), my Nokia E71 cellphone as well as my recording equipment (heavy as it is to carry), gorgeous dresses from Jo Borkett, Twitter and Facebook, huge helpings of gusto and my fabulous frolleagues (even if we do sometimes work on each other’s very last nerve!) and friends, who still get excited when they hear me on the radio.
~~Bring on 2010!~~