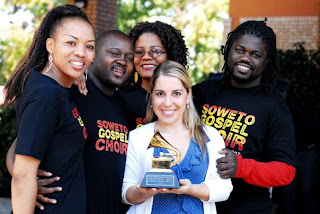 It was a goose-bump inducing moment of pride. And it made up for waking up at 2am to cover the Oscars for work. Seeing Soweto Gospel Choir up there on the Oscar stage. Sure, it was only for a few minutes, but the fact that Hugh Jackman gave a shout out to “Soweto Gospel Choir from South Africa” made it a memorable one.

Some other memorable moments that made this year’s ceremony entertaining for me included:

* Kate Winslet’s speech: say what you will, the woman has had to sit through this ceremony five times before, and five times before has lost out on Oscar glory. I would also have been a blubbering dramatic if it had been me up on that stage (oh, how I wish!).
I’d be lying if I haven’t made a version of this speech before. I think I was probably eight years old and staring into the bathroom mirror and this would have been a shampoo bottle. Well it’s not a shampoo bottle now. ” Kate Winslet, Best Actress.

* Sean Penn’s win: if anyone had to take it away from Mickey Rourke, it could only have been Penn. Haven’t seen Milk yet, but Rourke is brilliant in The Wrestler, so Penn must be double-so. Also appreciated his politically stirring speech, calling for equal rights.
” You commie, homo-loving sons of guns! I did not expect this and I want it to be very clear that I do know how hard I make it to appreciate me often. “
– Sean Penn, Best Actor.

* Danny Boyle channeling Tigger: as a Winnie the Pooh fan, I appreciated Boyle’s vigour and passion. Also love the fact that I can now add “interviewed an Oscar-winning director to my CV!”.
” My kids are too old to remember this now but, when they were much younger, I swore to them if this miracle ever happened, I would receive it in the spirit of Tigger from Winnie the Pooh, and that’s what that was. ” Slumdog Millionaire’s Danny Boyle, Best Director.

I interviewed Danny Boyle for Eyewitness News and wrote a piece for The Weekender.

* The music medley: Hugh Jackman and Beyonce as Grease’s Danny and Sandy – classic!